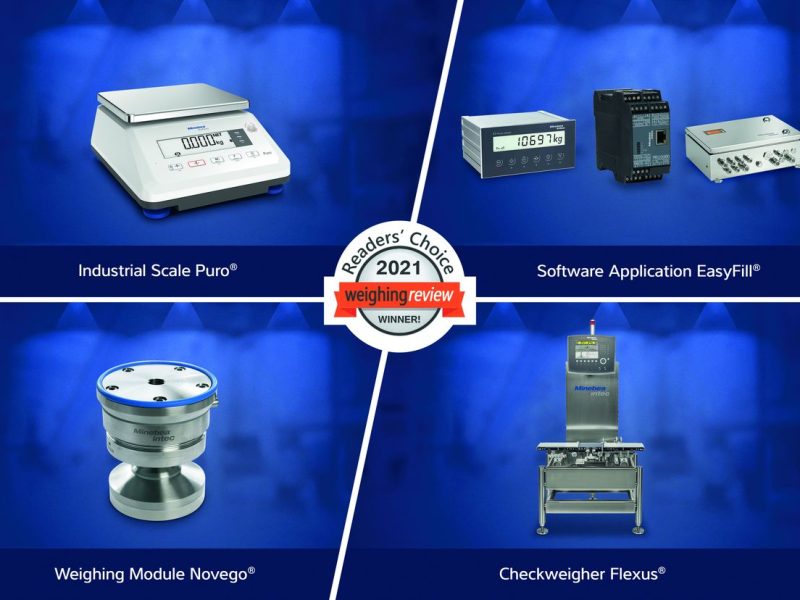 The annual Weighing Review Awards are an indicator of the company’s reputation among customers. This year, Minebea Intec managed to confirm its strong performance from previous years: the company came out on top several times in the voting of the international online platform “Weighing Review” – no less than four products secured first place.

The Readers’ Choice Awards from Weighing Review are a new challenge every year: the aim is to win the votes of the readers in a total of 20 categories relating to weighing. In doing so, Minebea Intec had to assert itself against a multitude of international established companies and also new competitors. “The four awards at the Weighing Review Awards are the visible result of our consistently good work,” Willy-Sebastian Metzger, Director Strategy, Business Development & Marketing classifies the final result. “Especially the renewed victory for our industrial scale Puro, which was introduced last year, shows that we perceive the needs of the customers and supply the market with suitable products”.

The company, headquartered in Hamburg, Germany, produces weighing and inspection solutions for a wide range of applications worldwide and has also scored with strong products in recent years. These successes have now been confirmed. Nevertheless, there was one flaw: unfortunately, the company was once again denied the title of “Best Weighing Company”. Will this look better next year?

A good prerequisite for also receiving this award in the coming year is the constant expansion of the product portfolio. In doing so, Minebea Intec not only focuses on the launch of new product categories, such as most recently the two price labelling systems WPL-S and WPL-A, but also delivers strong upgrades for existing products. For example, Minebea Intec has given its checkweighers with high-precision EMFC load cells a high-speed update: By implementing a new load cell with digital controller, weighing of up to 600 products per minute is possible, and the MID certification obtained allows belt speeds of up to 3 metres per second. In addition, the reduced minimum load means that products weighing as little as five grams can also be weighed verifiably in accordance with all standards. “With the high-speed upgrade for our EMFC checkweighers, we are making it clear that our goal is always the optimum,” Metzger classifies the new load cell. “For our customers, there will therefore be a lot of exciting news this year – in order to be at the forefront of the awards again.” Metzger also gives an exciting outlook into the future.

At www.weighingreview.com/award/winners/weighing-review-awards-2021 you will find all participants and winners of the current Readers’ Choice Awards of the Weighing Review.